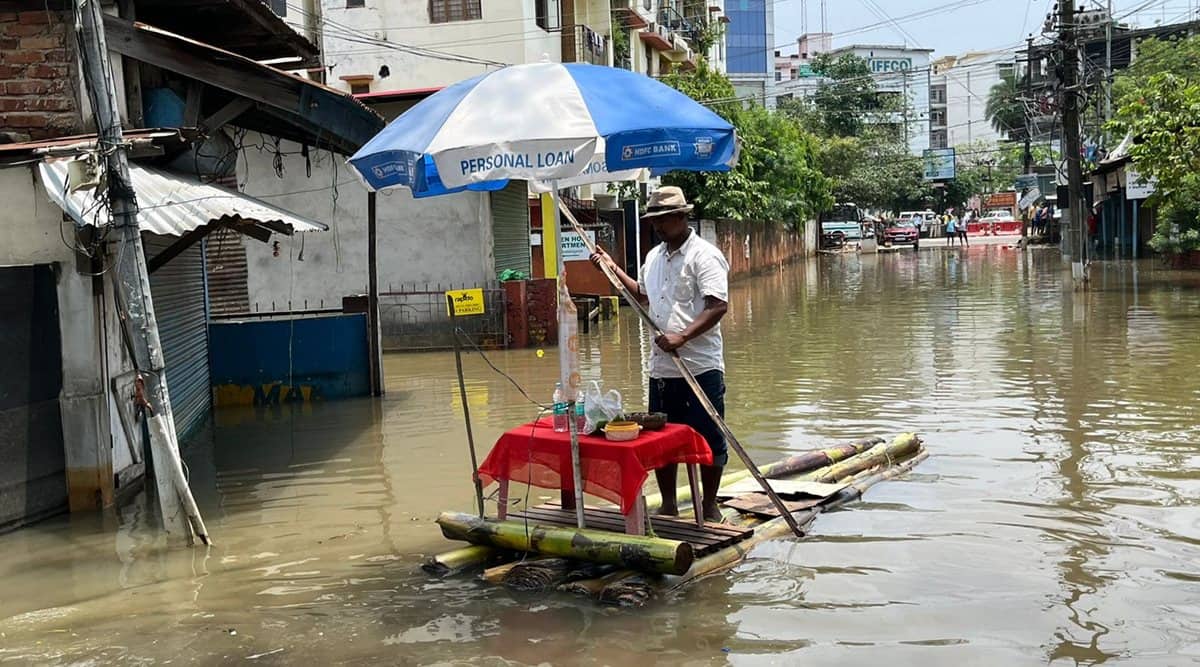 Heavy floods have changed people’s lives in Assam and the people face new challenges every day. However, showing a resilient side with a dash of creativity, a paan shop owner was seen delivering a few essential items on his ‘mobile’ shop.

Dhaneshwar Das set up a makeshift store on a raft constructed from the trunks of banana trees tied together and maneuvered through the waterlogged streets of Guwahati to help those stranded in their homes. Armed with a large umbrella, Das has set up his floating “shop” on the raft by attaching a small plastic table to it and uses a large bamboo as an oar to navigate the flooded streets.

Carrying essentials like water and candles as well as tamul (betel nut) leaves, Das floats on his mobile store through the flooded areas of Rukmini Goan.

Closed for a week due to flooding, a 35-year-old man sets up a floating shop – selling candles, matchboxes and tamul paan ofc – in a flooded locality in Guwahati. pic.twitter.com/ztViyncTu2

Talk to indianexpress.com, the small businessman said he had to resort to it to make ends meet. When asked what led him to think this, he replied that “necessity is the mother of invention”.

Over the past week, floods caused by heavy rains have rocked parts of Guwahati and Rukmini Goan is one such affected locality.

The man was selling bottled water, candles and paan in his makeshift store. (Source: Tora Agarwala)

Floods in Assam happen like clockwork every year. Just like the devastation that accompanies it. Currently, nearly 45 lakh people in 33 districts of the state are affected as the Brahmaputra River and its tributaries are alarmingly flowing above the danger level in several parts of the state. A statement from the Assam State Disaster Management Authority (ASDMA) on Sunday reported nine more fatalities, bringing the total death toll this year to 71.

According to the Guwahati Regional Meteorological Department, Assam has already recorded 47 percent excess rainfall between June 1 and June 15, with 284.1 millimeters of actual rainfall compared to the normal of 193.9 for the two weeks.