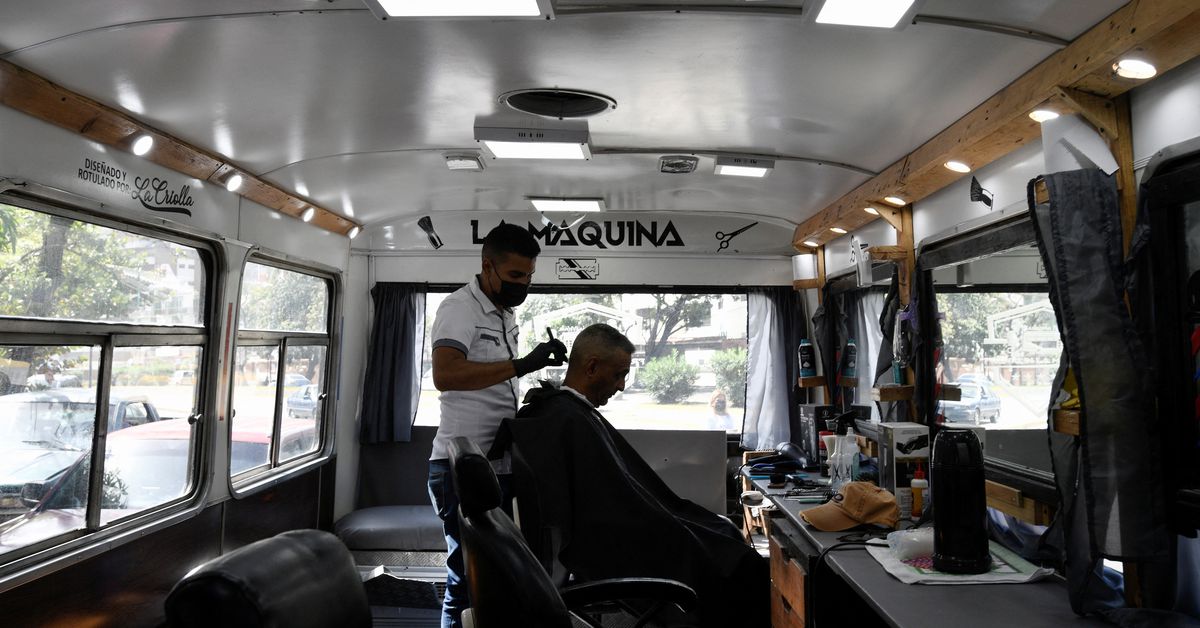 LA GUAIRA, Venezuela, March 2 (Reuters) – Barber Franklin Iriarte had to get creative to survive when Venezuela, reeling from a long-lasting economic collapse, imposed a nationwide quarantine during the COVID pandemic.

Inspired by YouTube videos of barbers from other countries, the father-of-two sold his car in August to buy a van which he transformed into a mobile barbershop.

“I wanted a storefront, but right now what they’re asking for rent is all you have,” the 38-year-old said. “I couldn’t swing it.”

Iriarte, who worked in several hair salons during his decade in the business, learned new skills to power the van.

He repaired, refurbished and painted it himself over several months, adding chairs and mirrors to the interior and installing air conditioning.

Franklin Iriarte gives a haircut to a customer at his barber shop, which he set up inside a bus, in La Guaira, Venezuela February 17, 2022. REUTERS/Gaby Oraa

“It wasn’t easy because there were times when there was no food in the fridge,” he said. “It was between keeping food in the house and moving the project forward.”

He started parking it around La Guaira, about 30 kilometers (18.64 miles) from Caracas, in December, and now works Monday through Saturday from around 8 a.m. until 9 p.m.

Venezuela’s economy has been faltering for years due to high inflation and sanctions against its once-thriving oil industry, although the government has eased some currency controls.

While public employees earn a monthly minimum wage of only $3 per month, Iriarte is able to charge $5 per month because private sector workers generally earn more and many people receive remittances from relatives who have emigrated. abroad.

Even so, Iriarte said he sometimes offered free haircuts to those who couldn’t pay.

So far, business is going well, he said. “Thank goodness (the company) has been well received.”